With fuel prices on the increase, even a small difference in fuel efficiency adds up to very large savings - money that no company can afford to waste.

Fuel consumption is a figure that’s often overlooked when buying a new truck, buried as it is, deep in the manufacturer’s VDI datasheet… and if the figure given does not compare well, who can blame the salesman for not drawing it to your attention? In some cases, the fuel consumption figure may not even be shown at all.

In this article we’ll show you what to look for, how it’s measured - and we’ll help give you an idea of how much money you could be saving, to spend on something else.

Read on and you’ll see that the fuel cost difference can add up to as much as 12,000 Euro per truck between two manufacturers over five years. A staggering figure, and with the cost of fuel rising ever-higher, it’s an issue that’s not going to go away or improve any time soon.

The fuel consumption figure given on forklift datasheets is typically shown as VDI 60.

This figure means the truck has driven a ‘duty cycle’ based on the VDI2198 test circuit (see figure below), carefully moderating its speed so that it completes this cycle 60 times in 60 minutes. Fuel consumption for the hour is then measured.

VDI stands for[‘Verband Deutscher Ingenieure’, the accepted standard for comparing fuel consumption of the different forklift trucks. However, in practice, how the truck is used, and, in particular, the way that the operator drives can, and usually does, make an even more significant difference.

The truck being tested drives forward to position ‘A’, then lifts its rated load to a height of 2 metres, reverses out and travels to position ‘B’ some 30 metres away, where it lifts its load again to 2 metres, before reversing to its start position. 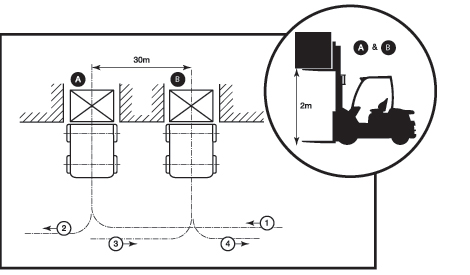 VDI test cycle according to VDI2198.

This is obviously quite an intensive cycle, and in most real-world situations a forklift will not work as intensively as this throughout its shift, but this is the standard measurement. A reasonable estimate of real-world fuel consumption cost may be reached by taking each manufacturer’s datasheet VDI60 fuel consumption figure – and assume it is working, on average, for just 60% of the time, or 4.8 hours a day.

So here’s how to work out total fuel costs for yourself:

The chart below shows five well-known forklift truck manufacturers (apart from Mitsubishi, their names have been removed). In each case, the manufacturer’s datasheet for a 2.5 tonne LPG engine model was used to obtain and compare the Fuel Consumption figure.

By using manufacturers’ own data, it was clearly shown that there is currently a large difference between manufacturers’ fuel consumption performance. When taken over short or long periods, and in moderately intensive applications, fuel can account for a very large part of the cost of ownership – a huge factor if the buying decision is influenced by price.

Figures calculated over a typical five year contract period show that an efficient truck can save its operator around £13,000 in fuel compared to the worst – using current fuel prices, which are certain to rise further.

Was this article helpful?
Yes
No
Thanks for your feedback
Share
Shared 1 times

Most read
Save money

When the time comes for companies to replace their aging forklifts, they often look for a second-hand truck in good condition. While there’s every chance that the used truck m...
Full story..
Save money

Short-shuttle forklift work: five ways to save time and money

Attachments 'save billions' for business

Cheap tyres - are they worth the risk?

The benefits of regular site surveys

Protect your fleet... and your pocket

Save money… and save the planet

But by opting for a refurbished forklift rather than new, you save money whilst giving a pre-owned piece of equipment a second life and contributing to sustainability.
Full story..

How the right truck could reduce your costs in the long run.
Full story..
Save money

Rise of the machines: do you need to replace your forklift with a robot?

It seems unavoidable. If you believe the many experts in magazines, websites and newspapers, all warehouse managers should be getting ready to incorporate automation and robot...
Full story..
Save money

When the time comes for companies to replace their aging forklifts, they often look for a second-hand truck in good condition. While there’s every chance that the used truck m...
Full story..
Save money

How a good maintenance contract will save you money

Forklifts, like most things, can decline over time with regular use. This aging and deterioration effects more than safety on site. It can also lead to unplanned breakdowns an...
Full story..
Save money

Cleaner engines are good for the environment – and your Total Cost of Ownership (TCO)
Full story..

Risky forklift operations could cost you your trucks, your business and - worst of all - your life.
Full story..
More under this category